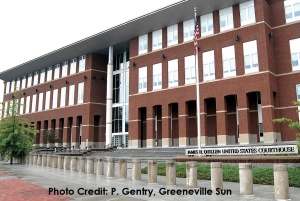 A motion has been filed by Plaintiff’s Attorneys with US District Court in Greeneville, TN to distribute Payment #3 in the Dean Foods Settlement of the Southeast Milk Litigation.  The motion, filed on July 24, includes some adjustments for previous payments, notes some requests for inclusion in the Settlement fund by a few latecomers, and the request of one party to be excluded for religious reasons.

Judge Ronnie Greer, the presiding judge in the Class Action Litigation, must first review and approve the motion before the claims Administrator, Rust Consulting, can begin cutting and mailing checks to class members.

If this payment process follows the time standards established by previous payment schedules, producers should be able to expect checks in their mailboxes within a six-week time frame, by late August or early September, if not before.  The only hold-up to that time frame would occur if a class member engaged a third-party attorney for collection purposes, or if there are any unexpected legal challenges filed at this point.

$20 Million has been placed in an Escrow Account by Dean Foods per the payment schedule outlined in Settlement documents.  The net settlement fund, which will be distributed to producers, will be the remainder of what is left after approved payments to attorneys and various related administration costs are deducted.

The total Dean Foods Settlement amounted to $140 Million dollars, of which $80 Million has already been distributed. This payment will bring that total to $100 Million, leaving $40 million to be distributed in increments of $20 Million each, in the years 2015 and 2016.

The monies will be distributed to over 6,000 approved class members, current and previous dairy farmers who operated in the Southeast United States in Federal Milk Market Orders 5 (Appalachian) and FMMO 7 (Southeast).  According to court documents, eligible producers would have been in operation in a time frame beginning Jan. 1, 2001 until the settlements claims deadline.

There is no need for producers to file or fill out any additional paperwork or claims forms at this time.

The amount of the payment a producer should expect in this payment cycle will be similar to, but likely not exactly equal, to the payment received last September from the 2nd Dean Foods Settlement Payment.

The Dean Foods Settlement, finalized in 2012, was combined with the Settlements of defendants Southern Marketing Agency and James Baird, and was the first of two settlements reached in this historic food industry class action litigation.

Dairy Farmers of America, Inc. and several related defendants, settled in January of 2013, and producers received one-time settlement checks in December 2013 and January 2014 out of an initial $140 Million Settlement Fund.  There are two potential payments left per terms of the DFA Settlement, dependent on utilization figures in FMMOs 5 and 7 in designated time periods.  There will be an update on those payments in the near future.

Background and Additional information may be found at this website: www.southeastdairyclass.com.

A copy of the 183-page motion may be found here.