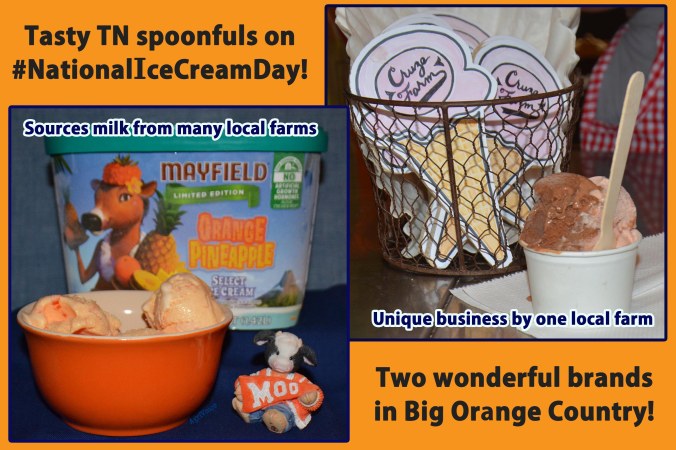 National Ice Cream Day (July 17th) has been served up with a spoonful (well, several spoonfuls) of local farm dairyliciousness !

In East Tennessee, in the very heart of Big Orange Country, ice-cream lovers are lucky to have many great flavors of ice cream available, which are produced using milk from local dairy farms.  Those many flavors are found in two different commercially available brands. Both brands, Cruze Farm, and Mayfield, are popular and iconic in their own right. And both brands support local economies all the way from cow-to-consumer!

Cruze Farm is a single farm which has elected to pursue the difficult path of being a single producer-handler.  They market several types of fluid milk, and are especially known for their buttermilk.  With a very memorable branding program featuring stylish milkmaids clad in gingham, Cruze Farm has become an East Tennessee  and southeast favorite over the past 25-or-so years. They recently opened a seasonal pop-up-shop near Market Square, a food hot-spot, in downtown Knoxville, TN.

Mayfield is a beloved commercial brand founded over a century ago in Athens, TN, and still based there, now under the Dean Foods umbrella.  Mayfield ice cream can be found in several states in the southeast and now expanding it’s geographic reach up the Eastern seaboard.

Due to its market scope, Mayfield supports many regional farms in the southeast, in turn contributing to local agribusiness and economies in the areas where those farms and cows are located. Dairy cows eat lots of feed, formulated and balanced in many different ways, with many different grains and forages.  Mayfield products, and the consumers who buy them, also support many area grain and hay farms who supply those cows with feedstuffs.  This is one way that a ‘regional food system’ which supports medium-sized family farms, continues to be sustainable.

On National Ice Cream Day, it seemed a natural fit to visit the new Cruze Ice Cream Shop. Many East Tennessee minds apparently were thinking alike, as a line out the door signaled the ice cream boutique’s popularity! 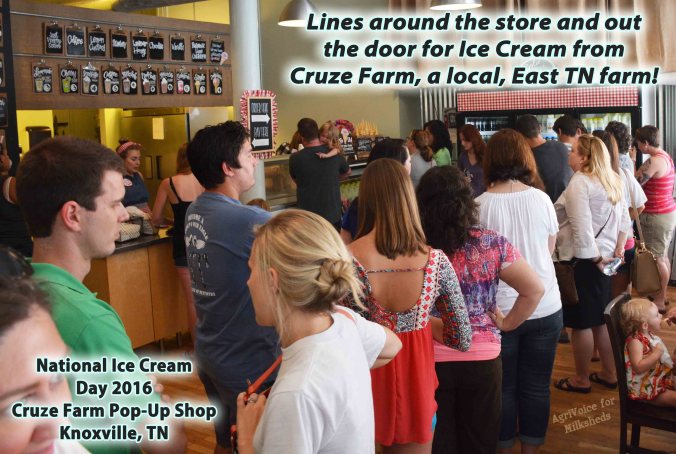 Knoxville Food Tours, which has hosted nearly 6500 guests in over 700 tours, had a lively group ending their culinary tour of the downtown area with cones and cups!  We talked about how #NationalIceCreamDay is really a ‘thing!’  Did you know #JulyIceCreamMonth and Ice Cream Day were official declarations of Ronald Reagan? 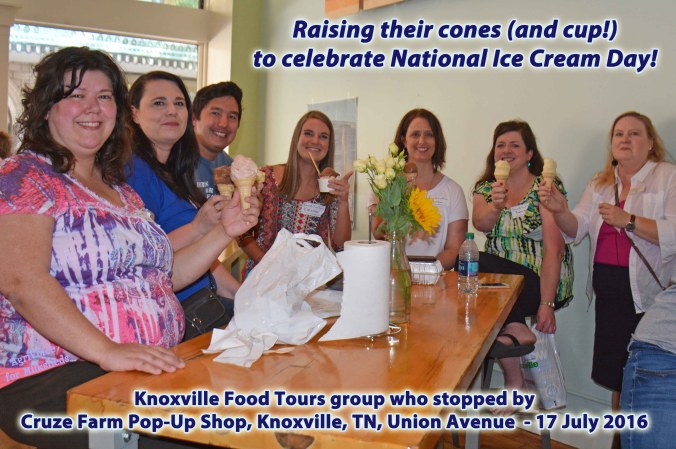 A member of the group, Katrina, also professed her love for ice cream’s parent – Milk! 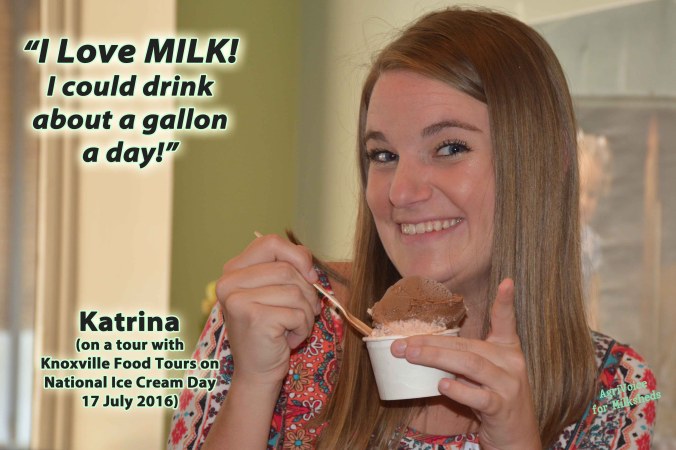 A group of folks who struck up a conversation as they made their way through line discovered they had several connections and common acquaintances through the UT College of Agriculture. (A couple already knew each other.)   It made for a great afternoon to spend time catching a sidewalk breeze and relishing the tasty treats!  From chocolate to strawberry to peach, a smorgasbord of flavors filled the cups and cones. 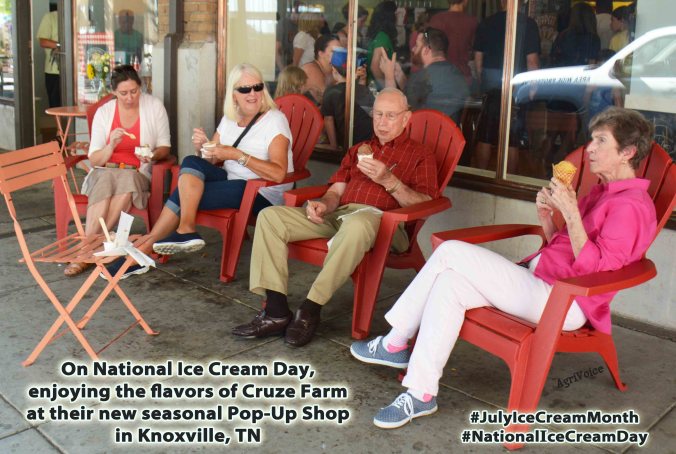 And anyone who knows Emily already knew what flavor she was savoring – Coffee! 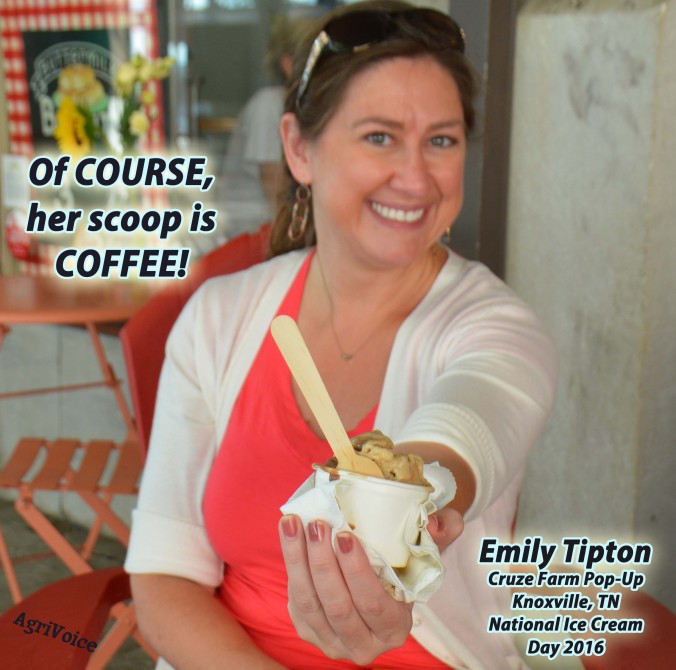 National Ice Cream Day in Big Orange Country could only end with a nightcap of Orange Ice Cream, this time courtesy of Mayfield Dairy, even it it was accented with a bit of pineapple. 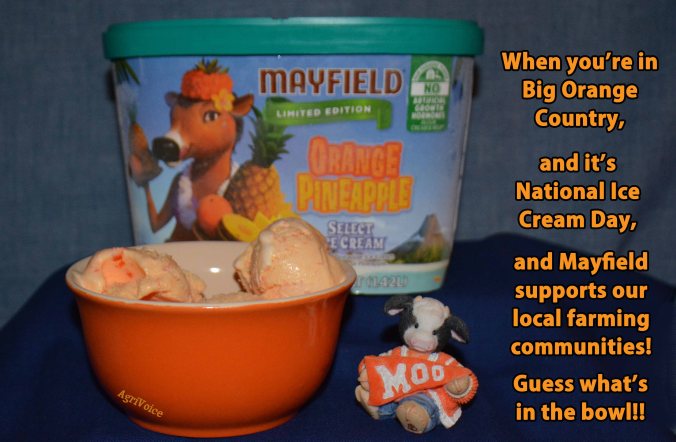 National Ice Cream Day in Tennessee.  That’s how we ‘bowl!’