The Passion of Randy Davis for promoting the goodness of milk is legendary to those who knew him, or who ever encountered him.

His legacy will continue to touch thousands of families this June Dairy Month 2017 following Randy’s untimely death in November of 2016.   To honor Randy’s life mission, the Randy Davis Memorial Milk Drive Fund was established.  Thanks to the kind generosity of his friends, family, and dairy community, the fund thus far has accumulated approximately $5,000, with contributions still coming in.

Following Randy’s life example, the Memorial Fund was set up to accomplish these goals:

Thus, the fund monies are designated to purchase brands of milk who source milk from southeast farms, reinforcing that milk is not only a nutritional powerhouse, but is also an economic generator in local economies.   The milk purchased is to be donated primarily to Second Harvest, who will then distribute it to local food banks through their networks. Other charitable organizations may benefit as well.

Because June Dairy Month was a highlight of the year for Randy, it was only natural that this month was a fitting time to accomplish those milk buys, donations, and deliveries.

Those funds are  currently being dispensed through a combination of private milk purchases in bulk quantities, and through milk buys at on-site milk drives taking place at Knoxville-area Ingles stores on June 1st, 2nd, and 3rd.   It is anticipated a final ‘buy’ will take place later in the summer, hopefully by July 1st, with the method yet to be determined.

The first purchase was completed on May 30, 2017 at the Mayfield Distribution Center in Knoxville, TN.    A group of Randy’s family, Second Harvest officials, Mayfield officials, and Memorial Fund Administrators gathered to mark the occasion.

824 gallons! A total of 824 gallons was delivered to Second Harvest – East Tennessee, who will then distribute those gallons to local food banks in their 18-county service area.  572 gallons were purchased with Memorial Funds, and Mayfield generously donated an additional 252 gallons!  We cannot thank Mayfield Dairy enough! 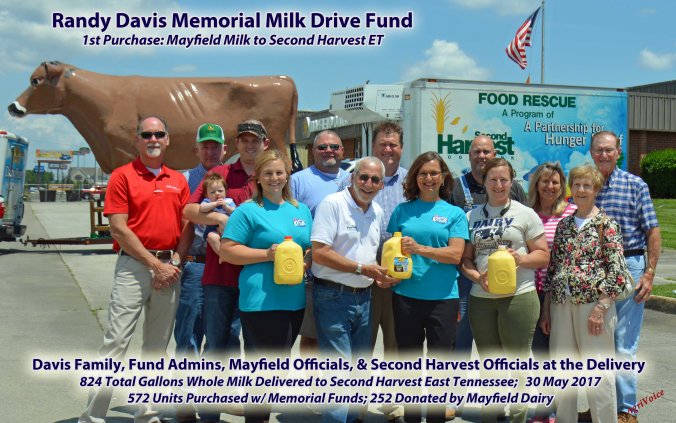 For the past four years, Randy had been instrumental in facilitating and organizing on-site Milk Drives at area retailers in East Tennessee.  These milk drives, some early ones at Kroger, with the bulk of them occurring at area Ingles groceries, are supported by Tennessee’s Dairy Farm Families via the Tennessee Dairy Promotion Committee.

Country Q 100.3, a Knoxville area radio station, and Ingles groceries have been welcome and excellent partners in these drives.  The total events have been coordinated by Kay Bradley, who personally has purchased lots of milk for the drives.

To further honor Randy, this year’s store milk drives have been designated the “Randy Davis Memorial Milk Drives” by Q 100.  They even have a tab at their home page!

If a person wishes to contribute but can’t make it to one of the stores, contributions can be made online here!

This year’s on-site Milk Drives are schedule for June 1-3.  In short, customers who visit stores are encouraged to purchase milk from the store’s dairy case and then bring to a Second Harvest refrigerated truck who collects milk during the event. Last year’s event yielded approximately 4,000 gallons total for Second Harvest.  (Learn More.)

Monies from the fund will make two purchases, in the amount of $850 each, at the store events on Friday, June 1st, at the Lenoir City Ingles, and on Saturday, June 2nd, at the Farragut Ingles.

Lenoir City is in Loudon County, Tennessee’s #1 County in Milk Production (also Randy’s home county!), so it was a natural to make a purchase there.  The Memorial Fund will make a purchase at approximately 6:30 pm (some will be traveling back from Nashville).

The Farragut Milk Drive on Saturday, June 2nd, will be joined by two UT Football #VFLs (Vols for Life)!  We’re so happy to announce that Jayson Swain, a Vol Network commentator, and Antoine Davis, who administers the Vol For Life Program, will be in attendance to help promote the cause!

We invite any of Randy’s wide circle of friends to join us at either of these events!

Randy was a man of deep faith, and many have been privileged to hear his testimony.

“Whatever you did for one of the least of these brothers and sisters of mine, you did for me,”  is a life’s instruction found in Matthew 25, verse 40.

As we honor Randy in this first June Dairy Month without his physical presence here on Earth, his faith, illustrated by this verse, will live on through his Memorial Fund purchases and these milk drives.

The Davis Family, the Fund Administrators, and the Dairy Community are grateful to each and everyone who has helped to see that Randy’s legacy continues on.

There will be more in the coming days about the Memorial Fund activities and the Milk Drives, but for now “Thank You.”  We hope to see you at one of the Milk Drive Events!