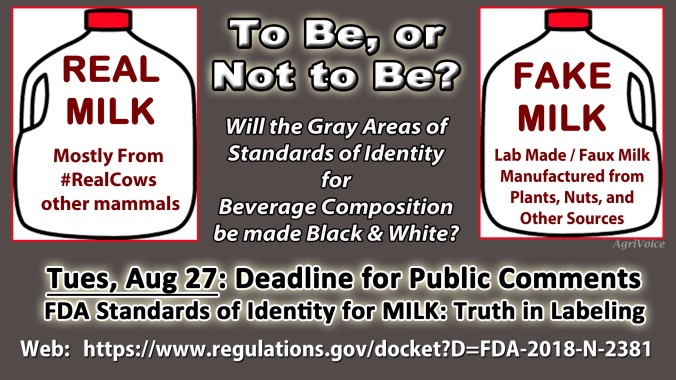 On March 29, 2018, FDA introduced the  “FDA Nutrition Innovation Strategy,” a comprehensive effort to review labeling of foods and an impact on human health, particularly in relation to preventable and chronic diseases.

“An almond doesn’t lactate, I will confess.”  And with those words, FDA Commissioner Scott Gottlieb, in a July 17 report by Politico,  amped up the debate about the relabeling of plant beverages which label themselves as ‘milk,’ which many believe are misleading and deceptive.

Although firm enforcement of FDA standards of identity should have been implemented several decades ago when “Plant Beverages” or “Nut Milks” first began to creep onto ‘dairy’ shelves, they were not.  No one knows the reasons why, but here we are, now with a debate and labeling examination which will cost taxpayers – and companies – millions of dollars.  Here’s some background:

First, it’s helpful to actually read and know about the standards as they exist: 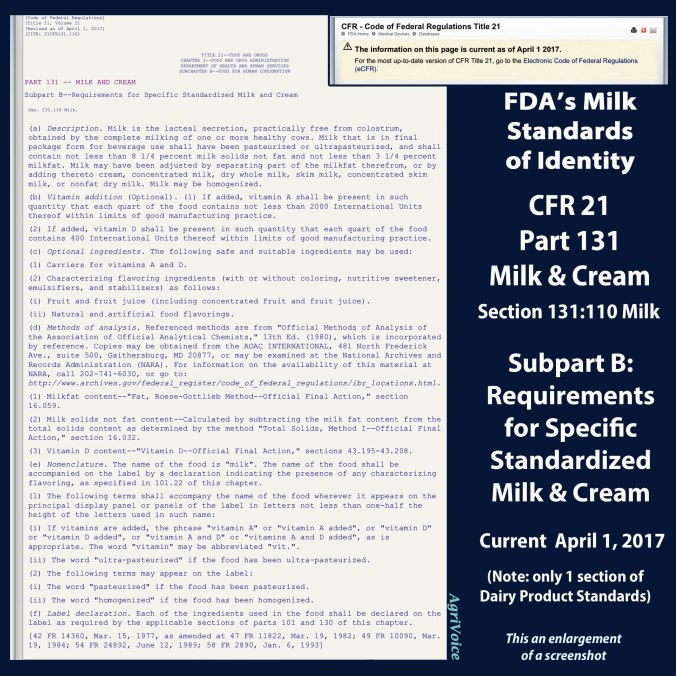 Standards of Identity for ‘Real Milk” were established in 1938 in the Federal, Food, Drug, and Cosmetic Act.

Part of the controversy results from the “real” vs. “processed” (aka ‘fake/faux ) nutritional properties of real milk.  The Wisconsin Agriculturist, in a July 23rd, 2018 article written by Fran O’Leary,  describes it this way:

“Real milk provides eight times more naturally occurring protein in every glass, is wholesome and simple, and is a minimally processed beverage. Real milk also has no added sugar. The sugar in real milk is lactose, which is a naturally occurring sugar. Many types of nondairy milk, such as almond milk, contain sugar. Tell that to your friends and family members who believe otherwise.”

The Wisconsin Agriculturist concludes that article by quoting an emphatic statement from the American Dairy Coalition, which reminds real dairy advocates:

“It is crucial the dairy industry speaks up on the issue,” the American Dairy Coalition said in a statement. “We can no longer stand by” and allow plant-based beverages to be labeled as milk.

On July 26, 2018, the FDA released an official statement concerning its reasoning and approach to re-working milk / dairy labeling standards.

This statement occurred in conjunction with a July 26, 2018 Public Meeting to Discuss FDA’s Nutrition Innovation Strategy.   Several industry stakeholders went on the record with comments at that meeting, and those comments can be accessed via links here.

Public comments on the FDA Nutrition Innovation Strategy will be taken until August 27, 2018.  (Update / 3rd week of August:  comments now taken until Oct. 11.)  Comments can be posted at this docket folder. (Electronic – OR – written/mail delivery submission is acceptable!).   It is particularly important for dairy FARMERS – those whose livelihood depends most directly on the sales of milk from their farms – to comment either individually, and via any producer organizations of which they are members!!

This proliferation of plant-based beverages has led to sales of those products which are expected to reach over $16 Billion (in US Dollars, but referring to the total world market value)  by the end of 2018.  That competition is in two forms: 1) dollars which have been removed from dairy communities & economies across the United States, and 2) Hundreds of Millions of gallons of real milk from real cows which no longer has a home, and has led to a long cycle of depressed prices which is steadily killing rural economies.

Much of that market displacement – and resultant stress on rural economies –  is believed to be because plant “milk” is a term which cannibalizes and preys on the goodness of natural milk, and the proven knowledge milk is natural protein source, readily absorbed by the human body.

It should go without saying, but never doubt that those organizations and businesses who continue to build their financial empires while opposing the enforcement of standards of identity of “Real Milk”  will be relentless and tireless in their fight to bend the narrative in their favor.

A collaborative editorial in a Boulder, Colorado, web-based publication, advocates for the blurred lines and gray areas which are the basis for the advocacy of truth-in-labeling for those who believe traditional standards of identity exist for a reason.  Their citations to many will be questionable, and in some cases, outdated in their accuracy, particularly in the Greenhouse Gas Emission discussion.   At least one commenter suggests alternative beverages be called ‘milk substitutes.’

The Good Food Institute, whose website has the tagline “Creating a healthy, humane, and sustainable food supply,’ has already submitted this letter on July 23rd, before the July 26th hearing.

Food Navigator, in an article written by Elaine Watson, relays views of a firm which recently raised $24 Million to commercialize ‘animal-free proteins.”  According to the article, the company ‘takes food grade yeast, and adds DNA sequences . . . which instruct the yeast to produce the proteins found in milk.”

[Note: Admittedly, this technology is morbidly fascinating, but also gives real meaning to the terms “Sci-Fi Food” and “Frankenfood.”  We really, really need to ask ourselves:  just because we can – should we?”]

Dairy Farming: continued decline, will it stabilize, or more consolidation?

It is no secret that the dairy farming industry is in a sea change of transition from smaller (400-head or smaller) herds to large herds of 1000 cows or more. And with that change, rural ag economies, the agribusinesses and services which serve those dairy farms are at risk themselves.

From New York, to Virginia, to Georgia, to Wisconsin, and to other regions, reports of dairy farms exiting from the industry are almost of epidemic proportions.  If these were job losses from a ‘factory in a big building’ closing, the public outcry would be deafening. However, because dairy is so scattered across the landscape and not contained in a single building like an industrial building, the loss of these economies is often a silent erosion that gets little public notice.

One example of some of the abuse that has occurred:

From The Cheese Reporter: Sunflower Butter!  A bid request from the USDA itself

But let’s give credit to #TraderJoes, who actually has an acceptable label on their plant beverages!  Kudos to them, and I’ll be back in their stores because they get it right! This is an example to others that it can be done! 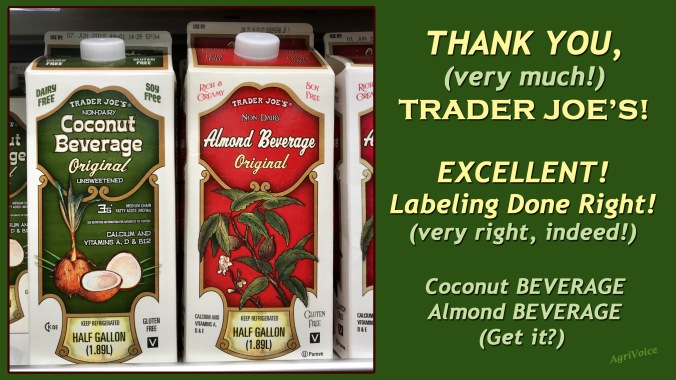 Additional Links to Consider (and look for others to be added before Aug. 27th!):

From Feedstuffs:  Gottleib:  “FDA . . . is invariably likely to get sued”

For now, please begin to do your homework, and draft your comments.   It could be as simple as “Real Milk comes from Cows, Goats, Sheep and other mammals.  Make this simple, and have “MILK” be labeled that way!”

You can save time, and comment via electronic means directly to FDA via the portal.  As you do this, please remember your comments may be able to be viewed by the public.

Please make sure that by late evening, on Monday, August 27, and now on October 11, your voice will be among them too.

On Thursday, August 9, 2018, Michigan announced a monumental project which will fill part of the void in worldwide dairy processing capacity.
Michigan Spartan LLC is the business entity developing a ‘world class dairy processing facility’  expected to process over 8 million pounds of milk a day when fully operating, said to be by September of 2020.  American Cheese is projected to be a primary product, with whey permeates, a by-product of cheese production used for food and feed applications, also a product offering.
The new facility is a partnership between Dairy Farmers of America (DFA),  Glanbia, Select Milk Producers, and Proliant Dairy Ingredients.  The venture is said to be similar to Southwest Cheese, a previously existing partnership of DFA, Glanbia, and Select Milk.
Michigan Milk Producers will also be a milk source for the facility.
The evolution of the project included a number of local and regional economic development and government agencies, with the Michigan Economic Development Corporation’s Michigan Strategic Fund board an integral player.  The Michigan Department of Agriculture was also involved.

The sheer magnitude of all the agencies and efforts involved in this monumental project offers many lessons to others considering dairy development efforts in any location.

Following is a digest compiled from media reports of today’s (August 9, 2018) from Michigan and other areas:

From the Detroit News:  “We really try to grow the value of the agriculture industry so that most of the commodities stay here in the state, have them processed here, keep the farmers here,” is a statement from  MEDC CEO Jeff Mason. The project is slated to receive $26.5 Million in Tax Abatements over 15 years.

From the Lansing State Journal (makes one marvel at the effort put into project):  the project involved a number of state and local government agencies, included tax concessions on several levels, with these project parameters:
From the Detroit Free Press:

From Crain’s Detroit Business;  a business publication in the area:

From The Charlotte Observer (an AP story)

A worldwide milkshed suffering from a lack of modernized processing capacity should benefit from this project.

Note: Additional links and updates may be added in the future to this blog post.