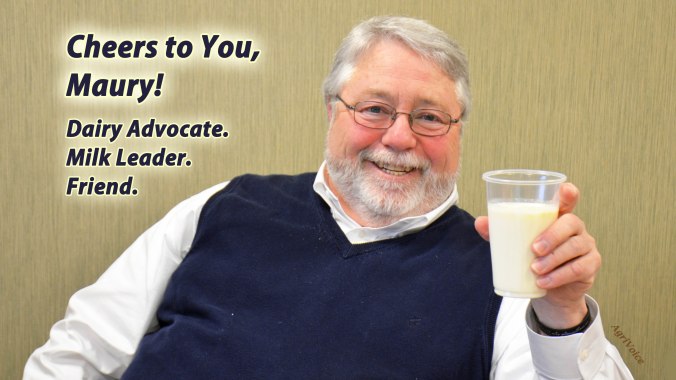 “It’s the people that make the difference, and there’s no better people than dairy farmers and their families.”
This is how Maury Cox summarizes his perception of the people he’s served – mostly in Kentucky, but extended to the Eastern United States – during his tenure as Executive Director of the Kentucky Dairy Development Council, a position he’s held since May 31, 2009.
Cox was honored by his peers and colleagues for his service to the Dairy during the Awards Banquet of the Kentucky Dairy Partners Annual Meeting in Bowling Green, KY on February 26, 2019.
Cox had announced a retirement date of March 1st, but since the position has not been filled as of press time, he will be available for additional duties until the time a new Executive Director is named. 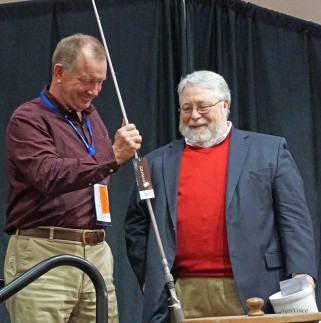 Maury Cox was honored at the KY Dairy Partners to recognize his service as Executive Director of the Kentucky Dairy Development Council. He was presented with a signatory crock, and was delighted to receive a new fishing pole, presented by Tom Hastings.  In case you didn’t know, Maury is almost as passionate about fishing as he is dairy cows and dairy people!

His leadership at KDDC culminates a life-long career in the dairy industry.  He began as a dairy farmer, and later worked for Kentucky Artificial Breeders Association / Select Sires.  He was a founding member of KDDC in 2005, and became the Dairy Consultant Director in 2007.

As Executive Director, Cox worked closely with and relied on the efforts of his current team of Area Dairy Consultants, who serve four regions across the state.  From left to right (above), they are Meredith Scales, Jennifer Hickerson, Maury Cox, Beth Jones Cox, and Dave Roberts.
On any one day, Maury could be speaking to a committee at the KY Legislature in the morning, visiting a farm in in the afternoon with his barn boots on, and ending the day by promoting milk at a ballpark.
Without a doubt, Maury led his state during the most challenging time of all in 2018 as 19 dairy producers lost their milk contracts and markets.  With grace, poise, and an almost 24-hour effort, Maury led the way to 11 producers eventually finding a home for their milk with either Scioto Milk Producers Cooperative of Ohio, and some with DFA.  As an eiplogue, some of those 11 survivors have since gone out of business as well.
Maury has collaborated with many affiliated organizations to advance the dairy industry in Kentucky, in the Southeast, and across the country. For a number of years, he, working with others, such as the Kentucky Department of Agriculture, organized bus tours and educational trips on a regular basis.
Maury has always appreciated the role an ‘outside perspective’ and exposure to new ideas can play in enhancing a dairy farm when new ideas are applied. The Kentucky Department of Agriculture has been one of his most valuable working partners through the years on these outside trips.  Additionally, he is considered a “Senior Statesman” of the southeast dairy industry.
He has made a point to build bridges with other state producer groups, respecting that there are differences from region to region which affect farmers in every area across the country.  When he learned something that made a difference to Kentucky, he tried every way he could to make that a reality in his home state.
A prime example is the implementation of the Market Industry Leader of Kentucky (MILK) program. With KDDC organizing a collaborative effort of co-ops and processors, the effort was designed to make strong improvements in Kentucky milk quality in order to remain competitive in today’s milk marketplace.
Over the years, this program has supported milk quality improvements, putting $8 Million dollars back into the Kentucky farm economy.  A longer term result is that the collective Kentucky dairy industry is generally more sustainable.
Communications of the KDDC also went to the ‘next level’ under Maury’s leadership.  The Kentucky Milk Matters newsletter is read across the southeast, and is considered an accurate source of current information.
As a regional policy leader, Maury played an instrumental role in the Southeast Dairy Coalition, an informal working group of grass-roots dairymen from several states who worked together to navigate the challenges of the 2009-11 Dairy Crisis, as well as influence the 2012 Farm Bill.
Sometimes as a leader, and sometimes in collaboration with others, he has been a part of many meetings concerning milk pricing and Federal Milk Market Order function, and has worked to effect change in that sector as much as possible.  Getting timely information to his producers has always been a priority.
As parting words, Maury offers this perspective on the future:

“As long as supply outpaces demand, over-order premiums in most markets will be non-existent. Premiums are where the profit is.  Until dairy farmers come together and decide they want something different, fewer and fewer will continue in business.”

Maury’s plans includes more time to recreate and travel with his wife, Sue, and their family, to devote more care to his mother, and of course, spending more time at any favorite fishing spot or watching a Kentucky Ballgame (basketball might be his favorite!)  It’s safe to say he’s as passionate about those things as dairy!
Maury is also a man of deep faith, and applies faith and prayer to every situation. He shows Christian grace in his everyday and his professional life, and his approach to some very difficult situations is a testament to faith in action. 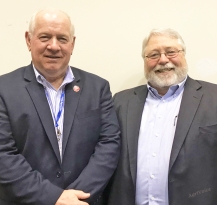 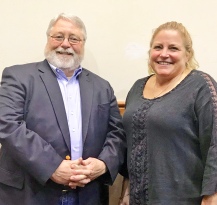 Robert Klingenfus, a former President of KDDC, says:   “The Kentucky Dairy Community has benefited greatly from Maury’s leadership.  His dedication to serve producers was unparalleled, and he has navigated challenging events with a calm, steady hand.  We can never thank him enough for his efforts.”

Bob continues:  “Maury has been a help to countless dairy farmers. On the surface we see Maury helping with Milk quality problems, division of water issues. But what he is really good at is what he calls facilitating.  He is a good listener and when you are done venting,  he will give a few suggestions and  the names of people that can help you with your problem.  He is careful not to tell you what to do, but facilitates  you with the ability to achieve what you are seeking.  Maury has become the go-to man if you need something; he seems to know everyone. If you need a barn, Maury knows who has built one recently, or sell or buy cows same thing, he put people together to solve problems.

“It has been an honor and privilege to serve you. I am a lucky and blessed guy,” were Maury’s closing words on the evening of the KY Dairy Partners banquet.

Here’s to you, Maury!  Those sentiments are a thousand times reciprocated!  We know we’ll be seeing you around!

We have been blessed you chose to serve us.