A #FlashbackFriday – 20 year Anniversary post looking back at UT’s National Championship Win in the Fiesta Bowl on Jan. 4, 1999!  Ag was involved!

[[ Note – this was originally published on 9 January 1999, in a column I contributed to the Kingsport Times-News. ]]

“Corn may not grow at all on Rocky Top, but it had a huge impact on the harvest of college football’s national championship by a Big Orange combine!

Yup, in more ways than one, summer’s slim stalks with big ears mean that we vapid Volunteer fans can at last sigh with satisfaction that a crystal football will now adorn the University of Tennessee’s trophy case! Whoever would have thought that something as humble as a kernel-filled, cylindrical-shaped object born of the soil would give birth to the reality that Tennessee footballs now reigns as pigskin royalty?

This championship born of corn actually took root last January when those corn-fed Nebraska ‘Huskers shucked our fair Vols of all hope of a ’97 championship in the Jan. 1998 Orange Bowl, whenNebraska won 42-17.  Fulmer and staff, although disappointed, made the best of the situation and learned what proper nutrition and conditioning contributed to crossing the Championship line, and they worked harder.

And, as Tee Martin and Peerless Price and Al Wilson entered spring practice with a newfound determination, so farmers entered their fields to plant seeds of corn destined to help pay for a BCS National Championship game.

It took 160,000 acres of prime cropland to grow the specialized white corn which ended up as the primary sponsor of the ‘Tostitos’ Fiesta Bowl!

Since Frito-Lay needs over 300 million pounds of corn to fill America’s demand for Tostitos, these corn fields need to be as proficient at kicking out kernels as Jeff Hall is at kicking points between the uprights!  All told, Frito-Lay utilizes over 1 billion pounds of shelled corn each year to fill all of its corn snack sales!

Although the corny side of Fiesta activities was courtesy of Illinois farmers, local agriculturists have played a major role in this year’s championship season as well.

Seeing the need for a stable, reliable supply of farm inputs, a team of Tennessee farm leaders had the foresight to form an organized system of stores over 50 years ago.  Now known as Tennessee Farmers Co-op, this agribusiness shifted its marketing scheme a couple of years ago, just as the Tennessee secondary adjusted to contain FSU’s Warrick, their lightning quick receiver.

Since Tennessee’s farming community now includes a large amount of part-time farmers and rural homeowners, the Co-op system saw the need for reaching a broad-based audience with ever-changing product lines.  And what better way to reach millions than through the Vol Network?!?!

Yes, for the past several years, your farm neighbors have helped bring you the familiar resonations of “It’s Football Time in Tennessee!”  Through TFC’s sponsorship of our beloved John Ward and Bill Anderson, football fanatics everywhere have benefitted from the dollars of farmers which brought every moment of the championship march to the radios of all true UT supporters!

The Tennessee Beef Industry Council, a non-profit organization which educates the public about beef’s benefits in a healthy diet, is responsible for the “Beef, It’s What You Want!” commercials on the Vol Network.  These advertisements are funded through beef check-off funds, collected every time a farmer sells cattle in the state of Tennessee.

[[[ Note: In 2017, The Tennessee Beef Industry Council celebrated its 30th Anniversary as a Vol Network Sponsor, and they celebrate Beef Day every season  at Neyland stadium ]]]

And who’s to say how beef’s protein contributed to the muscle power of linemen as they protected Tee Martin and sacked opposing quarterbacks?  Would there have been a National Championship without steaks and burgers?

As a farmer’s daughter, I first became a UT fan while riding with my dad in a combine.  John Ward and Bill Anderson kept me posted on the exploits of Dewey Warren and Curt Watson.

As a student at the University of Tennessee, I sat for many long hours in the stadium with John Majors at the helm.  I swung in the Upper Deck to the stadium-wide strains of “Hey Jude” as the Orange finally defeated the “the Bear.”  [Alabama Coach Bear Bryant]

John and Bill have been my connection to Neyland in the past few years as cows had to be milked at gametime, or harvest and crops or cattle had to be tended.

UT Football is almost as much as part of my heritage as agriculture, and my memories of each overlap and become intermingled until the turf of the stadium ripples back into the pasture grasses from which it evolved.

And on a cold January night when ice had to be broken on ponds so cattle could drink, the UT Volunteers were destined to bread through the ice and drink of the joys of a National Championship!

Farming was there – and farming will be there until the next time we hear again “It’s Football Time in Tennessee!”

Another Ag / John Ward / Vol Network tie – not a part of the original column:  Dairy Farms in Tennessee were an early sponsor of the Vol Network, through an in-state dairy checkoff program.  John Ward was in his early days as a broadcaster, and was helping to figure out a way to help introduce Coach Doug Dickey in his first season as head coach.  Ward sold ads to the Tennessee “Milk People,”  A slogan “For the Lip that Lasts, Drink Milk!”   In Mr. Ward’s Tribute in June of 2018,  Coach Dickey spoke fondly about this relationship during the Celebration of Life.  A video of Dickey’s tribute is here.

And John Ward even did some ads for Milk himself. 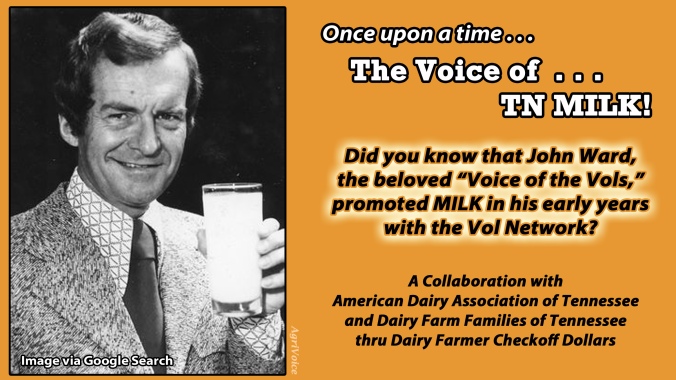 PS – Where has this column been hiding for 20 years?  Kind of ‘old-school filing’  (yet very effective!) with file pocket folders and Rubbermaid tubs!

Here’s to hoping we’ll hear those Magic Words again in the near future!  Since Coach Jeremy Pruitt has said his favorite food is ‘corn’bread, maybe that’s an omen?!?!